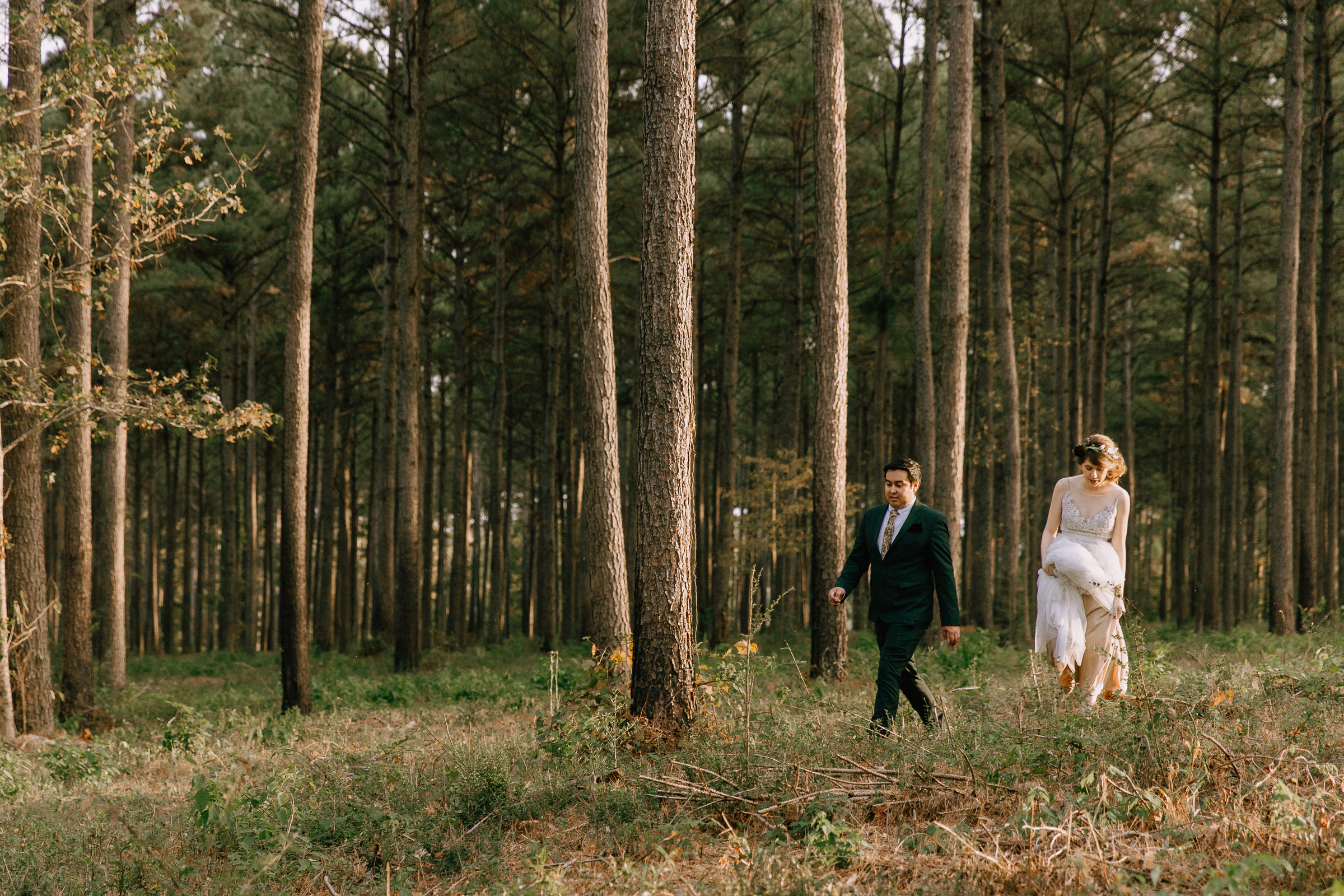 On October 17, Dusty and JC had their two year wedding anniversary.  That is how behind I am at blogging.  But Dusty and JC are two of my best friends and I always intended on sharing this wedding that is so near and dear to me.  For months Dusty and I poured over wedding inspiration blogs and (gasp!) Pinterest.  I was an “honorary bridesmaid” and helped her make many decisions for the day, a process I was overjoyed to be a part of since Dusty and I have very similar taste.  It was the wedding I was most involved with, by far.  You see, I take a special interest in their marriage because I feel sort of, kind of, a little responsible for the two of them getting together.  At least partially.  Why do I feel this way?  Well, years ago when I was living in Austin, Texas, Dusty was visiting my roommate and me.  JC and a few other friends decided to drive down to see me for less than 24 hours.  We all ended up under one roof, and Dusty ended up asking to ride back home to Hattiesburg with them instead of taking the train.  No sparks flew on this particular trip, so they will deny I played a role, but I don’t think the two of them were on each other’s radar very much before this, so in my mind… this was the early early beginning of what would grow into a beautiful relationship.

Dusty and JC chose the stunning Rasberry Green in Soso, Mississippi for their wedding.  Nearly every detail was DIY, with family and friends coming together to not only support the couple’s marriage, but to make sure every detail was perfectly in place.  Dusty ordered flowers and greenery online to create bouquets and table runners, which the bridesmaids put together.  Wild greenery foraged from my mother’s yard was used to decorate the arbor they were married under.  All the food: a fruit table, taco bar, and agua frescas, was made by JC’s family.  The cake was made by a friend and decorated by JC’s mom (with olive leaves from a tree JC had bought).  Even the other vendors were friends.  The officiant was Dusty’s brother.  The DJ and invitation/cookie designer were also friends of the couple.  Nearly everything except the dress came from love of these two amazing people.  Something that is rare and truly beautiful.

The real reason these two ended up together is cause they followed a band, The Drums, all the way to Mexico City.  This was not intended to be a first date, but it turned out to be one.  And with such an amazing common interest in travel and music, the two naturally became a couple shortly after.  Their first dance song was of course a song by The Drums.  Take a listen to what falling in love sounds like.

This wedding was previously featured on Junebug Weddings.

You know what I love the most about these beautiful photos, it’s the details behind the scenes! Such a gorgeous couple and amazing setting!

In wedding photos you normally see the getting dressed parts, but never the details that lead up to the wedding. I love how you captured all the decorating moments, with everything coming together. It was a beautiful wedding! Her dress is gorgeous.

I love DIY weddings because of the attention and love put into every single detail. You can tell this couple is so loved by family and friends, and that their love for one another is so sweet and strong. You did a beautiful job capturing every detail of their story, it is so beautiful.

This is the sweetest wedding! I love that all of their friends and family were so involved in their wedding day. You did such a beautiful job documenting this couple’s day. I love the portraits near the trees – such romantic lighting!

I love how everyone came together to make every little detail of this couple’s wedding day so special! Everything really looked just absolutely beautiful, and you did a wonderful job capturing everything! I especially love the first look images — they just capture this couple so well! From their silliness together, to their love for each other <3 Simply beautiful!

SO much awesome about this post! Their story is the sweetest. I absolutely love that you included so much imagery about the preparations that went into their day. And their details are beautiful particularly because they were so involved. Your story telling is so compelling, as well. Every little emotion captured and shared hear clearly shows your have a lot of skill and tons of heart that goes into your work.

Wow! All the wedding day preparation photos really helped start telling the sweet story of friends and family gathering for their vows. What a story teller you are! Gorgeous and intimate moments and creativity went into this. Love it!

So nice that everyone helped with the setup the day before. You don’t often get to see into the underbelly of the wedding preparations which can be really fun. The floral choices were gorgeous. Lovely images.

I love that you didnt just take photos of the wedding, but of every little detail that tells their story in a way that they could relive the day through these images.

This looks like the sweetest wedding ever! I love how personal all of these images felt.

Really incredible work! All the emotions are overwhelming me! I love the portraits near the trees and the dancing 😍

This is so beautiful! With the music playing I got pretty emotional just scrolling through all the gorgeously captured moments. Amazing work!

This is gorgeous, no surprise that it was featured on junebug! Espcially love those portraits in the trees, and all their emotion you documented during the ceremony. <3

I’m so glad you finally got round to blogging this gorgeous Wedding! Everything about this is just magical! And so lovely to see everyone pitching in to put it all together! 🙂

These are such stunning photos, and what a beautiful wedding! I am in love with your detail shots!

Maria, this is so beautifully written, and your shots are lovely! Truly caputruing true love.

REPLY
Inquire
SEND ME A MESSAGE

MARIA NEWMAN IS A WEDDING PHOTOGRAPHER BASED IN PORTLAND, OREGON. AVAILABLE FOR TRAVEL WHEREVER LOVE GOES.